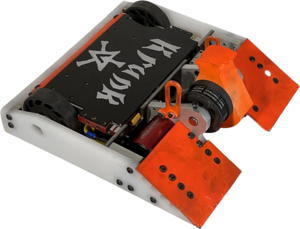 Krunk dubbed as Orange Pramheda when it debuted at Norwalk on April 23rd, 2022. Krunk is a complete redesign of Pramheda v3. The intentions of the build was to create another test platform for builder Zack Knight and to bring his brother Joseph Knight back into the Combat Robotics world. During Krunk's debut it tested several parts that could be interchanged with Pramheda v4. At the same time Krunk was missing several parts crucial to its own design that will be added before December finals.

Krunk started the April 2022 event against Sombra, while Krunk dominated the first two minutes of the fight a electronics failure sent it to the losers bracket. Krunk then fought a Team Defective teammate in Matt Luther and his robot Blue Cheese, it wasn't long into the fight when Blue Cheese was split open and unable to move. Krunk did suffer some self inflicted damage during the fight and the weapon motor became loose and burnt itself up. Krunk followed up that fight by fighting Whomper, a very well respected robot. Whomper and Krunk went the full three minutes in which Krunk won via Judges Decision after disabling Whomper's weapon. Two of Krunks next three opponents forfeited before the match, the only one that didn't was Richard from Cornell Robotics Club which tapped out 22 seconds into the fight. Via the Sombra forfeit Krunk was lined up to fight undefeated HLJ. The Krunk vs. HotLeafJuice started with a massive hit sending both robots across the arena but disabling HLJ's weapon, and after that the fight stays pretty tame. Krunk can barely get enough separation to effectively use it weapon other than some grinding. The fight ended up going to the judges and being won by Krunk via a split decision. The Grand Finals fight against HLJ started with the same pace, a massive hit sent both bots across the arena, Krunk was able to keep the pressure up after that hit and eventually HLJ ends up upside down, shortly after a weapon on weapon completely removed HLJ's weapon resulting in a tap out. Krunk made a full elimation bracket run to win April 2022 Norwalk 12lb Class.