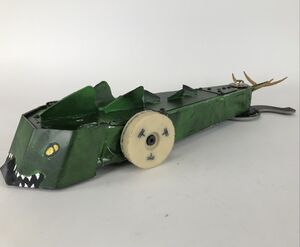 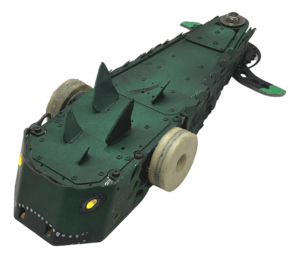 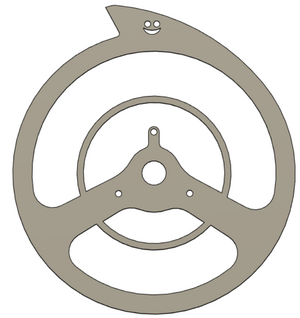 A horizontal thwack-spinner designed to attack the sides of its opponents by whipping around its tail. Using its armored head it can control and set-up its opponent and then swing around to attack.

Minimizer is Stegosaurus-themed, and features a toothy smile, TPU spikes, and a speckled green paintjob. Though the spikes stick out far above the wheels they are designed to collapse, allowing the robot to be fully invertible. The robot is a scaled-up version of the 1lb Thagomizer, and features a heat-treated 4130 chromoly wedge and a 6061 aluminum frame.

The spinner is made of Ar500 Steel welded to a live shaft, and the entire weapon assembly is held together with a single nut. This allows the weapon to be mounted both above and below the robot. Two types of blades have been mounted so far: an asymmetrical disk and a double sided bar. The disk is used against wedges and heavily armored opponents, whereas the bar is used against foam, big-wheel, and horizontal spinners. 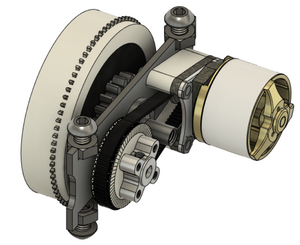 The drive system consists of removable pods that allow for replacement in under a minute. Rather than a conventional gearbox, the reduction is composed of a shock-absorbing pulley first-stage, and a durable chromoly gear second stage. The wheels are made from cast urethane with a printed nylon core and feature titanium "woodmagnet" spikes to help it get better grip on the wooden floor. With a inch of solid urethane and a 10mm hardened steel dead shaft they are designed to withstand most spinner hits.

Minimizer reached 3rd place in it's first event in March 2022 and qualified for the 2022 Finals.

Minimizer returned in November 2022 to test some experimental features, notably the 100% carbon fiber chassis. However the carbon fiber performed poorly, and the shattered chassis could not be repaired in time for a second fight. The decision was made to return to an aluminum chassis for Finals.

More videos can be found on Team Thagomizer's channel here.