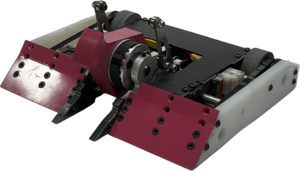 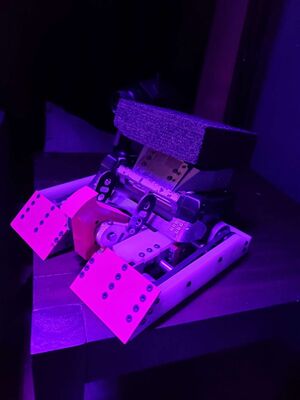 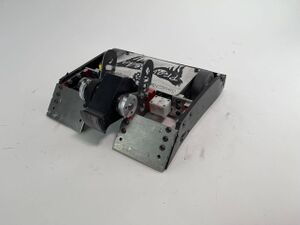 Pronounced (Prom-head-ah) Pramheda is a 12lb robot that was originally designed for competing at 15lb in the National Robotics League.

Originally debuting at Rage in the Cage in spring 2018 Pramheda (v1&v2) ended its time in the NRL with a combined record of 29-10. Taking home 3 tournament wins, a second, and another 2 third place finishes across the 8 tournaments it attended.

Pramheda v1 featured an entirely 3/8 6061 frame with 1/8 Ti armor on all sides, v1 used a weapon from a previous robot name Megalodon. v1 suffered from a series of electrical issues that caused to end with a 6-4 record between NRL Nationals 2018 and Rage in the Cage 2018 finishing third place.

Pramheda v2 premiered in the fall of 2018 at Rally in Penns Valley and started the day with a 3-0 start only to be bested by it's teammate Wanheda in a winner takes all finals matchup to take home 2nd place. Immediately following that Pramheda would win its next three tournaments (Collegiate Clash Fall 2018, Rage in the Cage 2019, and Collegiate Clash Spring 2019) with a combined record of 16-1, with its only loss coming to Sorcerer and Apprentice from Kent State University after Pramheda lost connection and was counted out. Following the three wins Driver Zack Knight would step away from the robot to drive Luna from Cal U Robotics. Pramheda would end its final two tournaments at NRL (0-2) driven by Trevor Sommer, and Rally Penns Valley 2019 (4-1) driven by Zach Baughman. Pramheda would end up tying Luna (driven by Noah Parsons) for third place at Rally in Penns valley 2019.

Most of the fights for Pramheda pre NHRL can be found on Knight Robotics YouTube channel. [1]

Pramheda v2 premiered at collegiate clash in November 2018 taking 1st with a 4-0 record.

Pramheda v3 premiered at March 2021 NHRL with a complete AR500 frame, this was the first time Pramheda did not feature an entire 6061 frame. Pramheda started the day with a forfeit due to electrical problems, but would go on to meet caulk in the finals and would end up taking home 2nd against Caulk, Pramheda locked in a spot to finals. Unfortunately common electrical problems continued showing up for Pramheda the problems doomed the ability to keep the weapon spinning during most of its fights.

At July 2021 NHRL Pramheda's electical issues showed back up and burnt up two weapon motors. Starting the day with a first round loss to Hot Leaf Juice, Pramheda found itself in Loser's Round 2 for the 2nd tournament in a row. Pramheda would finish the day 4th, after a massive KO hit by Bobby.

September 2021 NHRL started off to a different pace for Pramheda. With three quick victories Pramheda made it back to the Grand Finals against Busy Bee. Pramheda lost its weapon belt during the fight but was able to win a unanimous judges decision for its first NHRL victory. Pramheda's electrical issues didnt stay away the entire day which prompted the V4 design to be debuted at NHRL Finals 2021. Pramheda V4 was the biggest redesign the bot had ever seen, with the upgrade to 4wd, a bigger weapon diameter, and location change for the weapon motor. 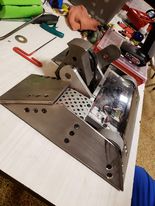 Pramheda started the 2021 Finals with a first round bye after entering the day as the 2nd ranked robot in the 12lb class. With a quick in over Busy Bee, V4s design seemed to be working out for the best, until in back to back fights it found itself against unconventional robot designs. Bobby and Ugee made quick work of Pramheda using their size as a major advantage. Pramheda would finish the 2021 Finals tied with Drunken Peasant for 5th and end the season as the 3rd ranked robot in the 12lb class.