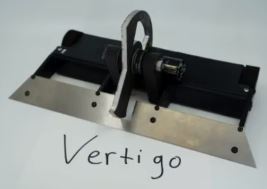 Vertigo as seen at the NHRL 2020 Finals

Vertigo was originally inspired by bots like Tempus and Division. The disk weighs around 400 grams, with the entire weapon weighing in at nearly 1lb. It currently relies heavily on it's relatively powerful drive and low wedge, due to constant weapon issues. It also set out to be unique in that it's chassis is a unibody Onyx chassis, which has been relatively successful in warding off damage.

Vs. Flip N' Cut: Vertigo and Flip N' Cut both spun up, and we hit one another twice. On the second hit, the scorpion DESC was jostled just enough for one drive side to temporarily lose power, and the wire protector, which had broken on the first impact, broke off and allowed the disk to cut one of it's weapon ESC wires. Unfortunately, Flip N' Cut lost a wheel shortly after and Vertigo won by tap out.

Vs. Mondo Bizarro: Vertigo made a tactical error in trying out their plastic wedge with metal forks, which proved totally ineffective. Mondo grinded away the wires that distributed power to Vertigo, shutting down the bot. Vertigo proceeded to tap out.

Vs. Yes: Vertigo and Yes both spun up, with Vertigo winning the ground game on the first impact. However, the plastic shaft, supported by only one screw that didn't run all the way through the shaft, snapped off, allowing the weapon to hit it's own pulley and decommissioning one weapon motor mount of the for the rest of the tournament. Yes lost it's wheels after those impacts and both bots crabwalked and did basically nothing until Yes tapped out.

Vs. Booring: Vertigo went into this fight as mostly a wedgebot, with the weapon only slightly spinning. Booring proved to be unable to get under Vertigo's metal wedge, meaning that Vertigo, shockingly, was able to control most of the fight and escape from a number of times where Booring did get under Vertigo. Vertigo won in a judge's decision.

Vs. Jack Rabbit: The fight started off even, with Vertigo sometimes getting under Jack Rabbit and Jack Rabbit controlling other portions of the fight, until one wheel unceremoniously fell off of Vertigo. Jack Rabbit won by tap out.

Vs. Brain Damage: Vertigo backflipped all over upon trying to spin up due to mixing setting on the transmitter. After a couple of bounces and one light tap from Brain Damage, Vertigo was dead in the water with the switch somehow having been disconnected. Brain Damage won by tapout/knockout.

Vs. Jack Move: Vertigo hesitantly spun up and managed to flip Jack Move, but got itself stuck twice in a row in the process. After this, Vertigo's weapon shut down and Vertigo resorted to pushing Jack Move for the remaining time, with Jack Move grinding away at the front of Vertigo. Jack Move won by JD.

Vs. Droopy: Vertigo had a last minute change of receiver before this fight due to the old one randomly dying. This meant the bot was twitchy for the first few moments, which gave droopy a chance to land one shot to the back of Vertigo. Vertigo landed only one counterpunch before Droopy landed 2 shots in quick succession, breaking the weapon towers, stripping the weapon motor mount screws, and sending the receiver outside of the bot. Droopy won by tapout.

Vs. Jack Rabbit: Unable to properly repair the damage done in the Droopy Match, Vertigo's weapon failed to spin up and Jack Rabbit, after getting controlled for maybe 5 seconds, put Vertigo on it's head with a new gash in the bottom. Jack Rabbit won by JD.

Vertigo was originally meant to be 8x5", but that proved too small to fit the chosen lipo so it was increased to 9x5" for the first version.

From September to December, Vertigo's design changed from that of a chassis-reminiscent of Cobalt to that of a far wider, larger profile bot. The weapon size remained the same.

Vertigo has 2 weapon motors, which has garnered criticism by many who point out such a setup is far less efficient than a single weapon motor. Thus, obligatory PSA: Don't run dual motor setups. 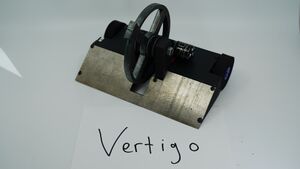