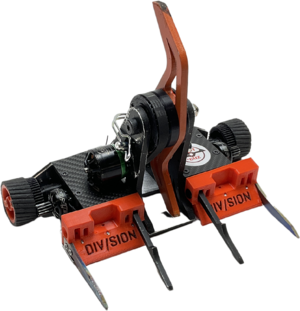 Division was always a mean robot to fight, but its explosive power proved to be its own downfall only a little less than half the time. With the V2.X archetype, repairs and maintenance were cumbersome, and with many retrofitted components taking the place of prior ones, the whole structure was really problematic in the end. At the end of 2021 it was retired officially, and a brand new from scratch redesign effort began, 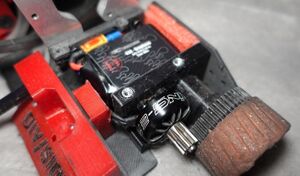 The emphasis for Version 3.0 was reliability and reparability. The weapon motor, weapon ESC, drive ESCs, and weapons themselves are the only parts carried over into V3.0. The drive system was entirely overhauled and replaced with a system first prototyped on the control bot Shrapnel Mine (pictured). Shrapnel Mine proved the system could work, and it was able to survive hits far better than any foam wheels with metal hubs ever could. This design is intended to accomplish several things: 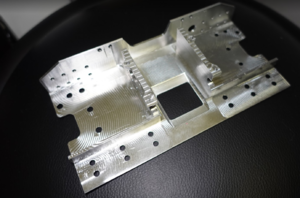 This chassis part weighs about 6.5 ounces and is milled from a single 4lb solid block of 6061 Aluminum 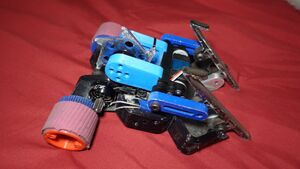 Another extremely huge experiment was with the chassis. In order to reduce the overall part count and fastener count while maintaining as much rigidity as possible for a given weight, a solid single part aluminum chassis was designed to be milled from a single block of metal. This chassis has numerous advantages compared to the prior structure.

Division V3.0 first entered the March 2022 tournament which exposed a few design flaws and sub optimal material choices. However, it worked as a proof of concept to show there was potential if the billet chassis were better protected. The weapon reliability was very good.

Division V3.2 was upgraded with even more durable Polypropylene drive mounts and rear armor, as well as a design change to the drive mount design to make it more easily serviced and more consistent to handle. This was also a test for a new tire molding compound that would adhere to the hubs much better, which while true, also wore down substantially after a few fights. Once again, Division lost to extremely competitive beater bar bots, but in four grudge matches it showed its true potential with dominant showings across the board. The reliability of the bot as a whole is very good, but there is still room for improvement.

Division V3.2 went on to compete at an event called Labor Day Disarray on September 3rd, 2022. Division had a great run at this event with 4 wins. Division beat May NHRL champion bot Crashfest twice, ultimately losing out to Caldera to earn a 2nd place podium spot, and winning the Most Destructive Bot award. Caldera was responsible for both of Division's losses at this event.

Division stores about 700 joules of kinetic energy in its various weapons with tip speeds approaching 235mph max. However, due to the gyroscopic forces created at top speed and the loss of bite at high RPM, Seth constantly modulates the speed of the weapon while driving to ensure turning is manageable and the hits delivered are biggest when the opportunity arises.

As of 2022, Division has five interchangeable AR500 weapons, but the asymmetric Cutter Blade is the current favorite, having the ability to survive horizontal spinner hits and cut through soft plastic and aluminum armor with ease. Each weapon is roughly 200-255 grams. Fights with Division very rarely make it the full three minutes - it is designed to end fights fast and decisively.

Division V2.12 in 2021 had been rebuilt many times since Version 2.0, but only gotten a ground up redesign between 1.0 and 2.0. Since V2.0, the drivetrain and weapon system have both changed drastically, the armor package has moved from entirely aluminum to mostly titanium, and the entire system voltage was raised. Only the exterior resembled what it was back in 2019. It was sold off at the end of 2021 to fund a brand new build for Division V3.0 in 2022

Division lived on to fight through many tournaments both in and out of Norwalk. General reliability improvements to the weapon system were made using a DYS Aria 70A BlHelo32 weapon ESC with conservative programming, a Cobra 2814 1850kV weapon motor with a beefy 5mm shaft, and clamping pullies that slipped on the motor shaft to prevent shock loads from ruining the motors. This last change p[roved to be extremely problematic, however. Toward the end of its combat career, Division V2.X had at least four instances where the pulley axially slid down the motor shaft until it came in contact with Division's own weapon, tearing the motor loose from its mounting. The first time the motor came loose was against Eruption in Division's first fight ever using the Cobra motors. At Division V2.12's final tournament, it was given a brutal sendoff by fighting against more than 9 opponents at once in a rumble, knocking five out, losing its weapon motor entirely in the fray, before falling on its back, unable to self right, just 20 seconds from the end of the match.

Division V1.0 first competed at Norwalk Havoc in August 2019 with a blue color scheme. After that, with wins over multibot Sisyphus and The Rock, and Foiled Again, but losses to Trident and Scrambler, the design was completely overhauled for a V2. Division has continually been iterated after every competition. V2.0 competed at Norwalk Havoc in September 2019, and then upgraded versions competed at the Franklin Institute, SWORD Fall 2019, Norwalk in January 2020, and Motorama in February 2020 with version 2.7. In every competition besides Franklin Institute where Division went 0-2, it has had a record of at least 2-2 or better.

Since Motorama (February 2020), the drive was upgraded to a fully custom brushless solution, the rear armor was upgraded, and Carbon-Fiber Nylon or TPU 3D prints were added in place of some plain Nylon parts from past versions. The weapon ESC was upped from 50A to 70A-80A, and the battery was larger as well.

In the November 2020 NHRL Tournament, Division did not perform exactly as expected, although still achieving a 2-2 record against incredibly tough opponents. Many changes which were tested over and over again before the tournament and seemed perfectly reliable, failed unexpectedly and early in fights. Weapon reliability was the main issue as it broke in several ways in different fights. In the end the most repeated issue came down to the weapon motor vibrating itself loose, allowing it to slip in belt tensioning slots from its ideal position. The slack in the belt meant that the weapon spun up fine with little resistance, but lacked the torque to self right like it had proven to do in testing. While the robot suffered little to no real damage in the fights it lost, it was unable to get back onto its wheels and keep driving. The custom brushless drive and 3D printed wheel hubs, however, performed amazingly well, and the drive never failed, even with the wheels taking direct hits in three separate fights.