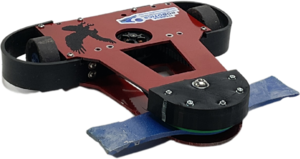 Red Hawk first entered Norwalk during the February event of the 2021 NHRL season, For it's first fight ever, It fought Crossbow, Red Hawk was victorious in that fight, for it's next fight, It fought a tough opponent called Eruption, it lost this one, then it fought Professor Hex, it won by judge's decision. Then, Voxel knocked Red Hawk out of the event by tap out. For March, It won 6 fights, 4 by tap out, 1 by decision, and one by knockout. However, it was knocked out by Vespula in round 8 of the loser's bracket. It came back in May with a whole new body, it lost both fights by tap out, one to Taurine, and had to forfeit it's second fight because the drive failed. It was not a great month, Now it will come back in July, September was my month to qualify for the finals, and Red Hawk did, November was a generic month, going 4-2. My first trip to the finals was amazing , despite going 1-2, it’s much better than I expected. 2022, unfortunately was rough, the competition grew, and it grew harder, most of my events were between 2-2 or 3-2 events, with a few grudge matches. But my favorite part of NHRL by far is the people I’ve met there