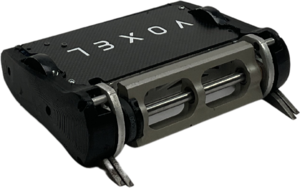 Voxel is a 2WD vertical spinner 3lb robot based out of Plum, Pennsylvania. Voxel has been competing on the Eastern side of the United States since mid-2019 and is currently on version 2.3. I'll try to update this page after each Norwalk event we attend. 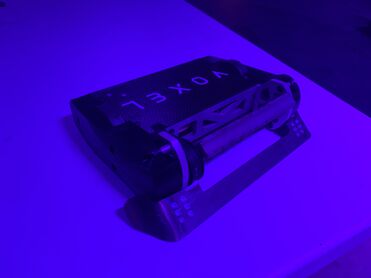 In the green room awaiting our first fight in March

Voxel has been competing on the Eastern side of the States since summer 2019, making appearances at SWORD, Motorama, and now Norwalk Havoc. Voxel's first design was a 2WD drum spinner with a UHMW frame and Garolite and printed PLA armor. The design did well and had much room for potential but suffered from a number of reliability issues, namely pinion gears slipping on the drive motors and traction on unpainted floors. The weapon itself was great at winning weapon-to-weapon exchanges, but due to the poor tooth geometry and high weapon speed it was rather bad at transferring energy into the opposing robot. 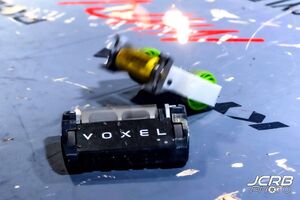 Voxel vs. Instant Regret circa May 2021. Credit to JCRB Photography

Version 2 of Voxel was designed after Motorama 2020 with the goal of resolving all of the design issues listed above. The design was finished around mid-May and the build turned into a fun little quarantine project.

Voxel vs. Shreddit Bro circa February 2021. Credit to JCRB Photography

The frame was upgraded from 3/8" UHMW plastic to 1/4" 6061 Aluminum for added rigidity and the top and bottom armor panels are now 2mm carbon fiber. These two materials combined result in a very rigid and a frame that is much stronger than the previous version. The old drum was scrapped and a newer, wider and more aggressive beater was designed. The new weapon is a few ounces lighter than the drum, but features a much improved tooth profile and is single-toothed, meaning it should bite much better than before. A larger weapon motor was swapped out and more reduction was put on the weapon for a lower top speed but higher low-end torque and faster spinup time. Apart from the weapon motor, most of the internals remained the same with the exception of the receiver. The last major change was new foam wheels that replaced the old BaneBots wheels for weight savings and hopefully improved traction and durability. 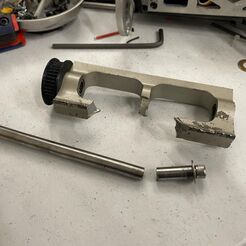 After going 2-2 for the third event in a row, Voxel is getting it's biggest design overhaul in over a year. Lots of major upgrades are already underway to improve the reliability of the drive and weapon systems. We had drive motor shafts snap inside the gearbox during two separate fights in September, so we will be modifying the motors and gearboxes and adding some other secret goodies. 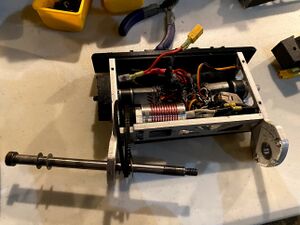